Launched in October of 2015 by the White House, Stop the Bleed is a national awareness campaign and a call to action. Stop the Bleed is intended to cultivate grassroots efforts that encourage bystanders to become trained, equipped, and empowered to help in a bleeding emergency before professional help arrives.

As of 2018, there are four pediatric verified and/or designated pediatric trauma centers in the State of South Carolina with the mutual goal to meet the specialized need of the pediatric trauma patient throughout the state no matter the level of care. 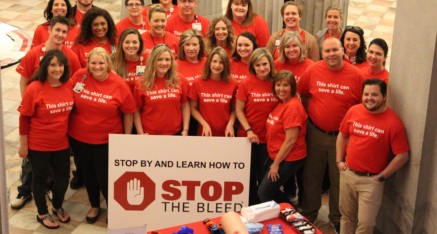 Children are not just little adults and require specialized medical care for optimum outcomes due to different anatomy and physiology, requiring separate pediatric subspecialties for trauma care. Our task is to address children’s specialized health care needs and promote recognition of the same throughout the state of South Carolina. In order to accomplish this TASC formed the Pediatric subcommittee in February 2017. The committee is made up of trauma program staff from multiple pediatric and adult trauma centers across South Carolina.

Bleeding control kits in every school will save lives

Amy Hamrick walked her 5-year-old daughter and 8-year-old son to school on Jacob Hall Superhero Day on Oct. 5, 2016. She struggled to explain to them the tragic reason why they were wearing Superwoman and Superman costumes weeks before Halloween.

“I didn’t want them to be afraid on the playground, so I told them a modified version of why they had on superhero clothes,” said Hamrick, APRN, who is the trauma program manager at Spartanburg Medical Center.

What started as an awkward conversation after a tragedy resulted in a statewide effort to put special medical kits in schools designed to stop children from bleeding to death.

Jacob Hall was 6 years old on Sept. 28, 2016, when he was shot in the leg. He was being ushered off the playground at Townville (SC) Elementary School when a teenage gunman began shooting. The wound put Jacob in a coma for several days before he passed away. The boy loved superheroes, and his family asked people to wear costumes to his funeral. School kids across the Upstate — and people around the country — also wore costumes to school in his honor.

“We walked a mile to school and back, and on the way back, I was sobbing,” Hamrick said. “I thought, ‘How can I help? How can I keep this from happening to my children, anyone’s children? What can I do to prevent children from dying preventable deaths?’”

By the time she returned home, Hamrick knew the answer: “I can’t fix gun control. I cannot fix safety in schools, but I can equip school leaders, faculty, and resource officers with the equipment and skill to stop hemorrhage prior to definitive care.”

Hamrick began the grant writing process to equip all public schools in South Carolina with bleeding control kits and the education on how to use them.

Her idea expanded to include hospitals and schools across South Carolina and the state Department of Health and Environmental Control Advisory Council – Health Care Preparedness helped. In 2017, the Upstate Healthcare Coalition presented a project to provide stop the bleed kits to all regional schools in the Upstate, as part of the Hospital Preparedness Program (HPP) grant funding, through the Office of the Assistant Secretary for Preparedness and Response and the Centers for Disease Control.

“We took this proposal to the State Health Care Coalition Advisory Council, and it was well received by the  other three regions in the state,” said Jeff Straub, CHEP, system safety and emergency manager for Spartanburg Regional Healthcare System.

Straub is also chairman of both the Upstate Healthcare Coalition and the South Carolina Healthcare Preparedness Consortium Advisory Council.

“As the landscape of our country changes and risk within it changes, we have to change with it,” Straub said. “We are seeing a large increase in school shootings and events that will precipitate need of the blood stop kits.”

Spartanburg Medical Center, Palmetto Health Richland, Grand Strand Regional Medical Center, and the Medical University of South Carolina received $1.2 million in funds to put bleeding control, or “B-Con,” kits in every school across the state. The funding is also being used to educate school nurses, teachers and staff about what to do if someone has a wound that is bleeding dangerously.

The kits have a belt-like tourniquet, trauma sheers, and gauze with kaolin, a clay that helps wounds clot faster.

Last summer, Spartanburg School District 6 purchased and placed bleeding control kits in every school, where first aid kits and automated external defibrillators, or AEDs, have become a normal part of life, according to Judy Edwards, RN, director of health services for the district.

“We have a number of kits in each school, strategically placed in locations for easy access in case of need,” Edwards said.

Like AEDs, B-Con kits are positioned close enough that it takes no more than three minutes to grab one.

The kits could be useful for any injury, including stabbings, glass injuries, and even penetrating traumas caused by a tornado, Straub said.

A child or adult could die from bleeding as quickly as five minutes, and the average response time for EMS is Spartanburg County is eight and a half minutes. A trained adult can quickly apply the tourniquet two inches above the wound, if it’s on an arm or leg, and pull it tight until the bleeding stops. These can stay on until EMS arrives. If the wound is in a junction, like the armpit or groin someone can pack the wound and put gauze in it, holding pressure until help is there, Hamrick said.

If the wound is in the torso or neck, someone can pack the wound and put gauze in it, holding pressure until help is there, Hamrick said.

An estimated one in five people who died from traumatic injuries could have survived with help from a B-Con kit, according to www.stopthebleedday.org.

“Our goal is to have all of the kits in place by August,” Hamrick said.

Training in schools will take longer, but this education is as important as learning CPR, she said.

“The goal is for every single employee in the district to be trained,” Edwards said.

Spartanburg Medical Center’s Trauma Services Department has trained more than 900 teachers, 650 students and 180 instructors on how to identify and stop bleeding since June 2017.

So far, District 6 employees have welcomed the training, said Edwards, who has been with the district since the mid-1990s.

“Twenty-three years ago, we didn’t have anything like this available to even think about using,” she said.

“It is a community effort to improve our community health in general, and we’re grateful,” Edwards said.

To schedule a B-Con course for your school or organization, contact tmack@srhs.com.

When Amy Hamrick’s 5- and 8-year-old children asked her why they were dressed as superheroes for school last Memorial Day, she paused, then decided to tell them why…

SC School Nurses Learn How to ‘Stop-the-Bleed’ in Columbia

TJ Mack shares an inside look at tomorrow’s Stop The Bleed training at WestGate Mall. Come see us at the mall on Saturday anytime from 10 a.m. to 3 p.m…

A team effort led to grant funding that will provide 19,000 life-saving kits to every school in South Carolina. The idea for the initiative started in Spartanburg…

BOTTOM OF EACH PAGE

Who helped make this happen?

DHEC Department of EMS and Trauma